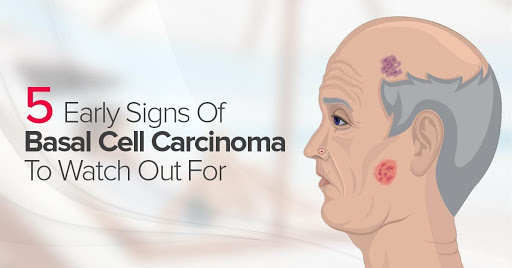 Basal Cell Carcinoma or BCC is a condition that affects the cells of the skin in the lowermost layer of the epidermis. If caught early, BCC can be entirely treated without any chances of disfigurement. Here are five clues that your skin will give you which may indicate BCC.

BCC is one of the most frequently encountered skin carcinomas in the United States with 80% of the total cases being attributed to it. In addition to being the most common type of skin cancer, it is thankfully the least life-threatening of them all too. In fact, BCC is rarely known to proliferate other parts of the body which means that it stays contained in the original cancerous growth. Most people with BCC have a history of extensive exposure to the sun for a prolonged period. In some cases, though, especially in light-skinned people, even occasional sunburns can lead to the development of BCC.

Early detection of signs that point towards a BCC growth is the best way to avoid damage to the skin and scarring. We have listed the 5 symptoms that you should keep an eye out for in case you belong to the high-risk category for BCC:

If you spot any of the skin growths mentioned above, get them checked immediately by your physician. The sooner you detect a BCC tumor, the easier it is to treat as well as avoid injury to the muscular or nervous system.

If you have any questions or wish to schedule an appointment, call (352) - 597 -4998 or follow this link to request an appointment online.

3 Reasons Why World Cancer Day is SO Important

Chemotherapy Tips To Brave Its Side Effects

Pancreatic Cancer - How to cope with the side effects of therapy