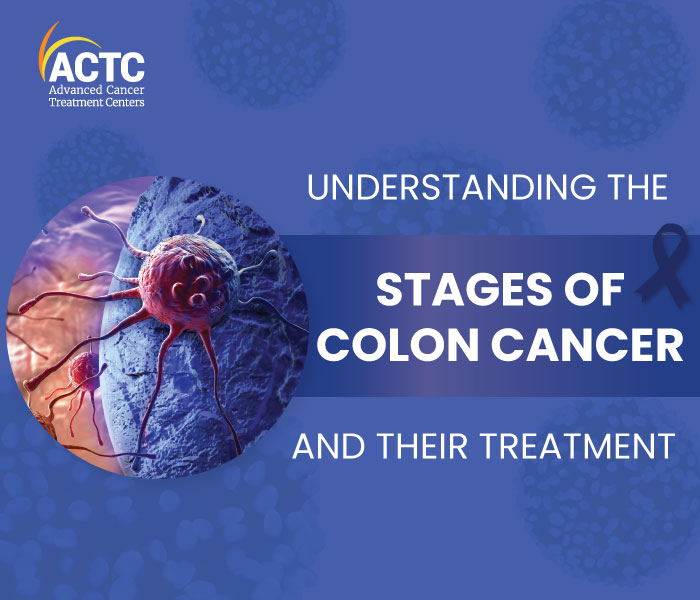 Understanding The 5 Stages Of Colon Cancer

After skin & lung cancer, colon cancer is the third most common cancer reported in men and women in the United States. In 2021, 104,270 new instances of colorectal cancer and 45,230 reported cases of rectal cancer were confirmed in the US, according to the American Cancer Society.

Overall, 1 in 23 men (4.3 per cent) have a lifetime risk of colorectal cancer, while women have about 1 in 25 (4.0 per cent) lifetime risk. To learn more and comprehend the risks associated with this cancer, it is necessary to be informed about colon cancer and its causes.

What Is Colorectal Or Colon Cancer ?

Colon cancer is a form of cancer that originates in the large intestine and spreads throughout the body. The colon is the last part of the gut or digestive system. Colon polyps, which are a tiny collection of cells that grow on the inside of the colon, are often the first signs of colon cancer. Some of those polyps can be benign, while others can turn into colon cancer with the passage of time.

When a person is diagnosed with this cancer, specialists will try to determine how far it has spread. This is referred to as staging.

A cancer's stage refers to how much cancer has developed in the body. It aids in determining the severity of the cancer and what treatment options are suitable for the condition. Survival rates are also figured out once the stage of cancer is confirmed.

What Factors Determine The Stages Of Colon Cancer?

The American Joint Committee on Cancer's (AJCC) TNM method, which is based on three critical pieces of evidence, is the most commonly used staging approach for colorectal cancer. The system uses the following parameters:

The innermost layer (mucosa) that lines the colon or rectum contains abnormal cells, although they may not be cancerous at this point.

Cancer that starts as polyp is classified as Stage I of colon cancer. The innermost layer lining the colon or rectum harbours cancer cells that have expanded into the second layer of the tissue (submucosa).

In this stage, cancer may have progressed to an adjacent muscle layer (muscularis propria), but no nearby lymph nodes have been impacted.

Cancer has spread all the way to the outermost layer of the colon or rectum wall, but it has not progressed any farther.

Here, cancer has gone beyond the colon or rectum wall's outer layer, but not to surrounding tissues or organs.

Cancer has spread beyond the outer layer of the colon or rectum wall, into surrounding tissues or organs, but not to lymph nodes or major distant organs.

In this stage of colon cancer, the cancer has spread to the mucosa and submucosa layers of the colon or rectum wall, and it may have reached the third layer (muscularis propria). One to three neighbouring lymph nodes have also been affected, or cancer cells have been discovered near the lymph nodes.

Or cancer has spread to four to six adjoining lymph nodes after passing through the first two layers of the colon or rectum wall.

This means cancer has spread to the colon or rectum wall's outermost layer (serosa). It may have progressed into the visceral peritoneum (outermost covering of organs suspended in abdominopelvic cavity), which lines the abdominal organs but hasn't yet reached surrounding organs. One to three neighbouring lymph nodes have cancer, or cancer cells have been identified near the lymph nodes.

Alternatively, cancer has expanded to the muscle layer or outermost layer of the colon or rectum wall, affecting four to six lymph nodes in the surrounding area.

Cancer has gone beyond the colon or rectum wall and into the tissue that lines the abdominal organs, but not to surrounding organs. Four to six lymph nodes in the area are reported to be cancerous.

Alternatively, cancer has progressed through the tissue that surrounds the abdominal organs. It's identified in seven or more lymph nodes in the area.

At least one neighbouring lymph node has cancer, or cancer cells have been discovered near the lymph nodes.

Cancer has spread to a different location or some major organ than the colon or rectum such as the liver, lung, ovary, or a faraway lymph node.

In this stage, the cancer has spread to other areas, beyond the nearby organs. 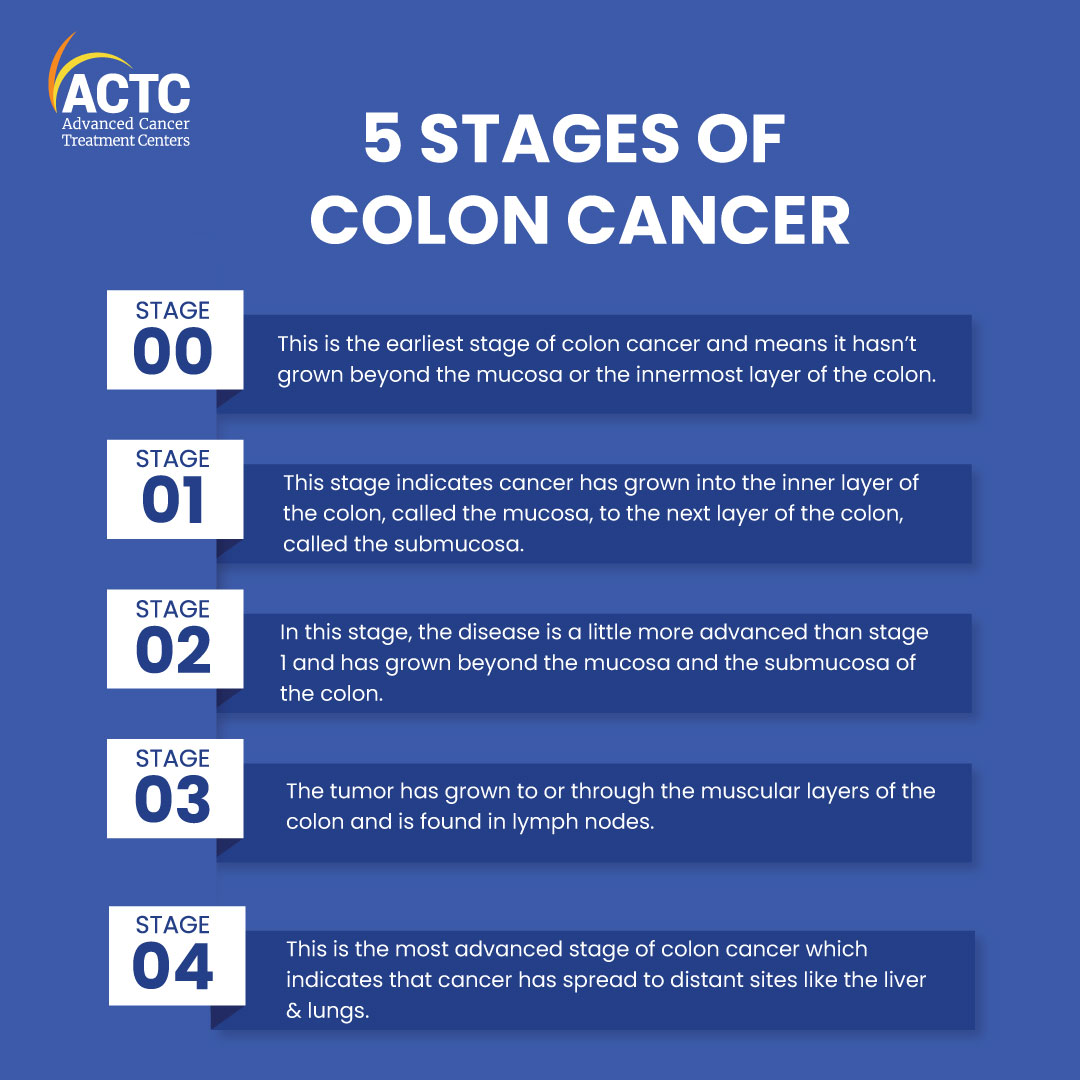 Treatment Of Colon Cancer (As Per Stages)

Treatment for colon cancer is mostly determined by the cancer's stage (expanded percentage), although other factors can also play a role. However, depending on the stage of colon cancer, the following are some common treatment options :

Colon cancers of stage 0 have not migrated beyond the colon's inner lining, so surgery to remove the cancer is generally the only option. If a lesion is too large to be removed by local excision, a partial colectomy (removing a portion of the colon) may be recommended by the cancer providers.

Cancers that started as a polyp are identified using a test called a colonoscopy. If no cancerous cells are found at the edges of the excised piece, no further treatment is necessary. If the polyp couldn't be eliminated further surgery might be recommended. Removing the cancerous segment of the colon as well as nearby lymph nodes is the standard treatment for cancers that aren't polyps.

The removal of the cancer-affected region of the colon and adjacent lymph nodes can be the only treatment required. However, your doctor may suggest additional chemotherapy if the cancer is at a greater risk of recurrence due to certain conditions.

The typical treatment for this stage is a surgical procedure to remove the piece of the colon with cancer and adjacent lymph nodes, preceded by topical chemo. For certain severe colon cancers that cannot be eliminated by surgery, neoadjuvant chemotherapy combined with radiation may be used to remove cancer surgically later. For someone who is not healthy enough yet for surgery, radiation therapy and/or chemotherapy could be an option.

Surgery is not necessarily required to treat 4th stage cancer in the majority of patients. On the other hand, surgery may help if there are a few specific places where cancer is present and they can be removed together with colon cancer. This would necessitate surgery to remove the area impacted with cancer. Chemotherapy treatment is usually given following surgery. If cancer has progressed to the liver, hepatic artery infusion would be used in certain circumstances.

Radiation treatment can then assist in averting or curing cancer-related problems in the colon, such as discomfort. It can be used to address regions where cancer has spread, like the lungs or bones. It may temporarily decrease tumours, but it is unlikely to fight cancer. It's important to comprehend the treatment aim if your doctor suggests radiation therapy. 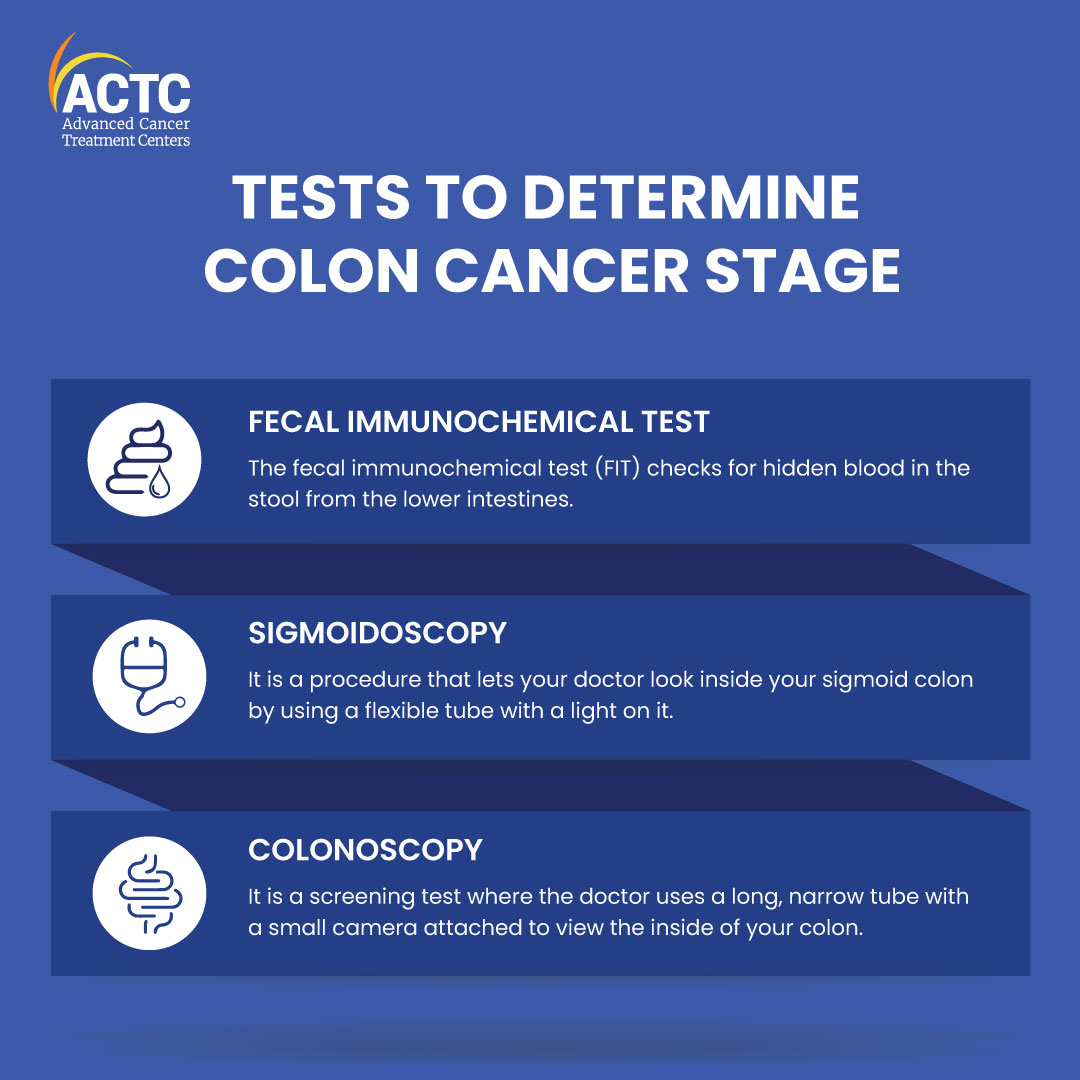 We hope you found this read useful and informative in learning more about colon cancer and understanding the subject better.

Reach out to the best cancer care specialists in Florida today if you'd like to speak with one of our professionals about yourself or someone close to you who has been diagnosed with colon cancer recently.