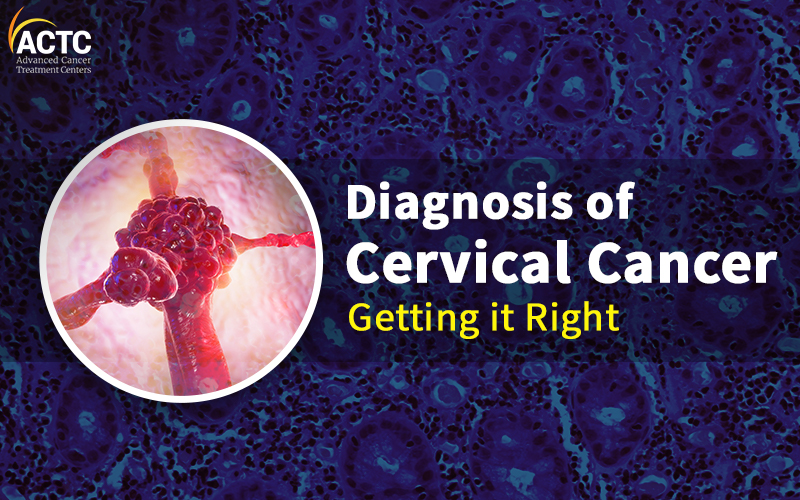 Diagnosis of Cervical Cancer: Getting it Right

According to the World Health Organization, cervical cancer is the fourth most prevalent form of cancer among women. The American Cancer Society had predicted that the US would see nearly 15,000 new cases of cervical cancer in 2021.

However, cervical cancer death rates have been falling over the years due to preventive vaccination programs and increased screening, which can detect cervical alterations before they become malignant.

What is Cervical Cancer?

Cervical cancer occurs when the cells in a woman’s cervix (the area that connects the uterus and vagina) change. If left untreated, it can spread to other parts of the body such as the bladder, vagina, rectum, and liver.

How is Cervical Cancer Caused?

Infection from the high-risk Human Papillomavirus (HPV) that spreads through sexual contact is responsible for causing nearly 99% percent of cervical cancer cases. Cervical cancer can be prevented with the timely administration of HPV vaccination amongst girls and young women and through regular Pap Smear screenings amongst women.

However, since cervical cancer manifests slowly, most cases can be successfully treated if detected early. If diagnosed at a later stage, symptoms can still be managed with proper treatment and palliative care.

Correct diagnosis of cervical cancer and accurate estimation of what stage it is in the body is critical for correct treatment; which may deliver higher levels of positive outcomes. Let's delve deeper and learn more about cervical cancer, its phases, and treatment options. 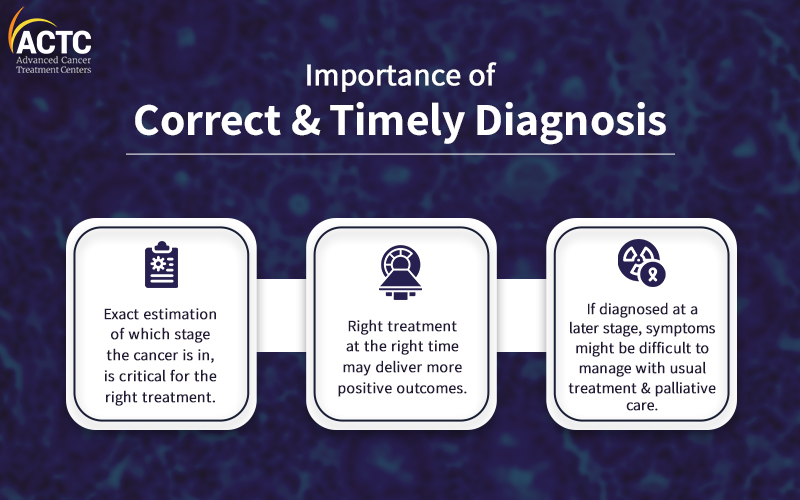 How Does HPV Cause Cervical Cancer?

When the cervix is infected with HPV and cancer develops, the cells go through a process known as dysplasia, in which abnormal cells appear in the cervical tissue. Malignant cells may develop into cancerous cells over time, spreading more through the cervix and into adjacent tissues.

Human Papillomavirus (HPV) infections cause most cervical malignancies. HPV is an exceedingly common virus family. There are about 100 different varieties of HPV, with at least 14 of them causing cancer. According to the World Health Organization, two HPV varieties (16 and 18) are responsible for 70% of cervical malignancies and pre-cancerous lesions. HPV has also been linked to anus, vulva, vaginal, penis, and oropharyngeal malignancies.

Understanding What Pre-Cancers Are

Cells do not become cancerous overnight. Instead, the cervix's healthy cells eventually develop unusual alterations, known as precancerous lesions. Doctors use terms like cervical intraepithelial neoplasia, squamous intraepithelial lesion, and dysplasia to describe these precancerous abnormalities. The pre-cancers are evaluated on a scale of 1- 3, based on their abnormality.

Cervical cancers then arise from cells that have undergone pre-cancerous alterations, although only a limited percentage of women with pre-cancers of the cervix will develop full-blown cancer. It’s been noted that pre-cancerous cells or lesions in most women will disappear without therapy. Pre-malignancies, in some situations, can develop into actual cancers in some women. Cervical pre-malignancies can be treated to prevent almost all cervical cancers.

Signs and Symptoms of Cervical Cancer

Cervical cancer can produce many different signs and symptoms. Getting a correct diagnosis for cervical cancer is wise if you have the following symptoms : 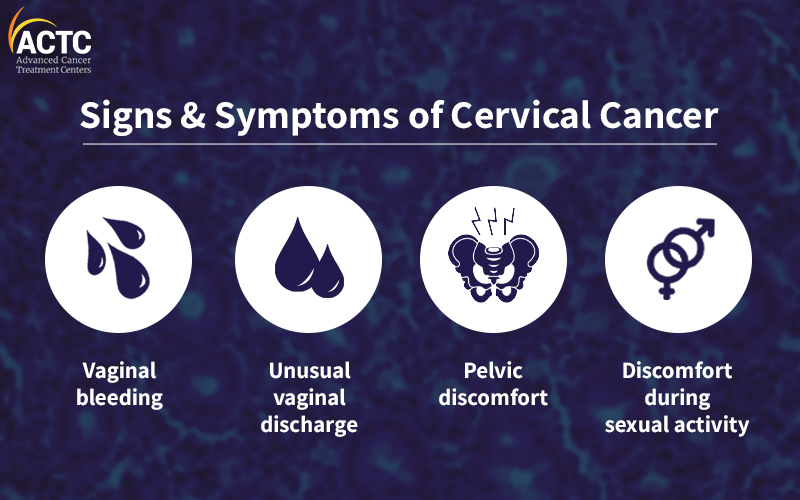 The most important advance in cervical cancer screening is the Pap Smear and high-risk HPV testing. If anything unusual is spotted, a cervical biopsy will be prescribed.

Other tests such as a colposcopy or a loop electrosurgical excision procedure can diagnose changes in the cervix.

Unusual changes in cells on the surface of the cervix are usually called squamous intraepithelial lesions (SIL). These lesions are precancerous cells. They may not become cancerous for months or years.

If a biopsy shows cancer that has progressed, further tests will be done - to see how far has it spread. These may include:

These tests will be used to "stage" cancer according to how big the lesions are, how deep they go, and how far they’ve spread. Cervical cancer ranges from stage 0 (least severe) to stage 4 (metastatic disease- the most severe).

Cervical tumors and pre-cancers are identified - based on their appearance under a microscope. Squamous cell carcinoma and adenocarcinoma are the two most common subtypes of cervical cancer.

Stage 1 of Cervical Cancer means that the cancer is only in the neck of the womb (cervix).

It is often divided into:

In stage 1A the growth is very small and can only be seen with a microscope or colposcope. It can be divided into 2 smaller groups:

Stage 1A1 means the cancer has grown less than 3 mm into the tissues of the cervix.

Stage 1A2 means the cancer has grown between 3 and 5 mm into the cervical tissues.

In stage 1B, the cancerous areas are larger, but the cancer is still just in the tissues of the cervix and has not spread. It can usually be seen without a microscope, but not always. It can be divided into 3 groups:

In stage 1B1, the cancer is deeper than 5mm but not more than 2cm in size.

In stage 1B2, the cancer is at least 2cm but not bigger than 4cm in size.

In stage 1B3, the cancer is at least 4cm but is still only in the cervix.

Cervical cancer in Stage One is generally removed surgically, or a regimen of chemotherapy and radiotherapy (chemoradiotherapy) is prescribed.

Stage 2 indicates that cancer has gone further into healthy tissue beyond the cervix. However, it has not spread to the ligaments and muscles that line the pelvic area (between the hip bones) or the lower portion of the vaginal canal.

Stage 2 can be categorized into two more stages - stage 2A and stage 2B.

Stage 2A2- The lesion size is more than 4 cm in this stage.

In this stage, the Cancer has spread to the cervix regions.

Chemoradiotherapy, a combination of chemotherapy and radiotherapy is the preferred treatment option for Stage 2B.

Surgery is prescribed in some cases.

In stage 3, cervical cancer progresses beyond the cervix and out into the pelvic area and the vaginal canal. It can also grow large enough to obstruct the ureter tubes, which carry urine from the kidney to the urinary bladder.

Stage 3 is divided into the following three sections:

Cancer has advanced to the bottom third of the vaginal wall; it has not yet migrated to the pelvic wall in this stage.

Stage 3B: The tumor has penetrated the pelvic wall or obstructs one or both ureters.

Stage 3C: This is where cancer has spread in the pelvis but has not migrated to other parts of the body.

In Stage 4, cancer has spread to the bladder and the rectum. Surgery, radiation, chemotherapy treatment, or a combination of these treatments is the most standard treatment option.

Stage 4 cervical cancer is further separated into two stages - 4A and 4B.

Stage 4A: When the disease progresses to the bladder or the rectum, it is classified as stage 4A.

Stage 4B: When cancer has dispersed to distant organs, such as the lungs, it is classified as Stage 4B. Your doctor may refer to this as secondary or metastatic cancer. 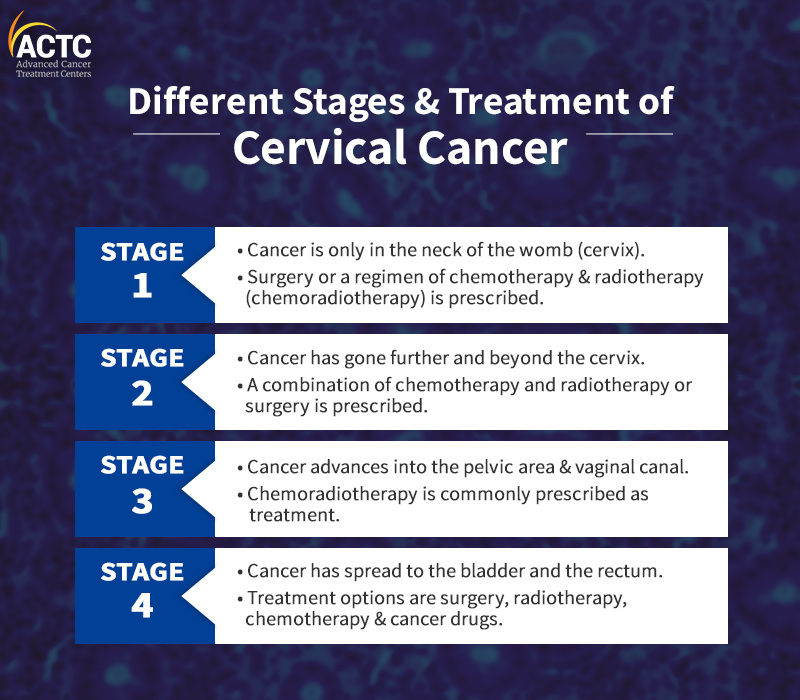 What is the Medical Viewpoint for Cervical Cancer?

As is the case with other cancers - the earlier cervical cancer is detected, the higher the chances are of survival and recovery.

It is essential to stay informed about the risk factors and ensure prevention by following prescribed measures by your health care providers. Consultations with  cancer care specialists  are also advised to address both preventive and curative requirements as needed.

Is Your Smartphone Increasing Your Cancer Risk

Cancer Prevention Methods at A Glance

Helpful gifts for your loved ones with cancer