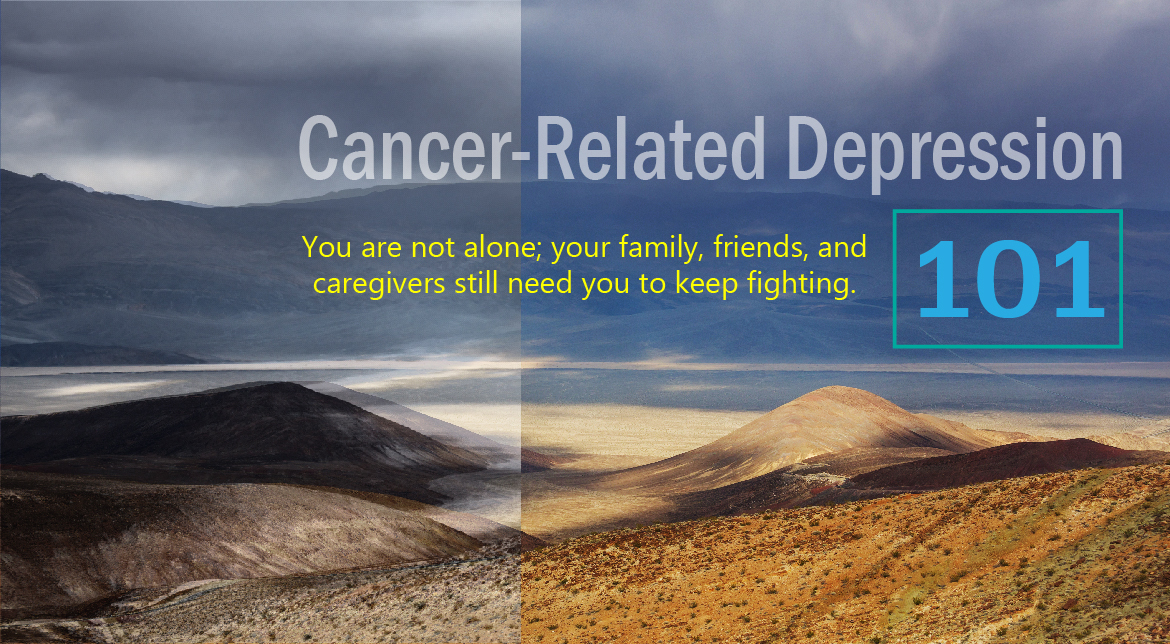 Depression is a mood disorder common among patients with cancer. It goes without saying that a cancer diagnosis can elicit feelings of anxiety and fear but only about 10% of patients experience the debilitating psychological and physical effects of a major depressive episode.

Although depression may take a devastating toll on those who suffer from it, the disorder is often treatable through therapeutic interventions. There is hope!

Sadness and irritability are often mistaken for depression. Feeling blue or being down-in-the-dumps may resolve without intervention, but major depressive disorder is a veritable killer if left untreated. Patients with cancer may develop depression for a variety of reasons and find themselves subject to a wide array of disturbing symptoms.

Feelings of hopelessness associated with the diagnosis may build into an almost unimaginable sense of guilt and fear of burdening ones family and physicians. The physical pain of ailment combined with the side-effects of undergoing treatment may grow insurmountable and drastically alter a patients sense of well-being.

Sleep quality may suffer, and changes in appetite and activity levels may result in unexpected weight gain or loss. As tasks and hobbies that were once easy and rewarding become more and more laborious and seemingly devoid of meaning, patients may even contemplate suicide.

Treatment of depression usually begins with a combination of psychotherapy (speaking with a therapist) and pharmacotherapy (treatment via drug interventions).

Through a dynamic process of evaluation and response, you may undergo various forms of psychotherapy. Sessions may take place one-on-one or in groups (including families and couples). Therapy focuses on modifying pathological cognition and behaviors, remove obstacles to self-expression and improve social interactions as well as the development of coping skills in response to stress triggers.

Coping skills include strategies such as reaching out to others about personal issues you’re facing, relating to the personal struggles of others affected by mental health problems, maintaining social engagements, exercising and enjoying nature, spending time with pets, staying active in your community and eating a healthy diet.

Medications used to treat symptoms of depression exist among several different classes of drugs. These classes are named after the neurochemical structures and functions they alter including:

Selective Serotonin Re-uptake Inhibitors (SSRIs): Drugs that cause increased serotonin production through a feedback look by preventing serotonin re-uptake in specific sites in the brain. Serotonin is responsible for regulating mood. SSRIs are well-tolerated and often used as a first-line medication when beginning treatment for depression. Popular SSRIs include Prozac, Zoloft, Paxil and Lexapro.

Selective Norepinehprine Re-uptake Inhibitors (SNRIs): Drugs that inhibit the re-uptake of norepinephrine in the brain, causing increased production of norepinephrine through a feedback loop. Norepinephrine is the “fight or flight” neurotransmitter and regulates alertness or arousal. SNRIs are a common second-line drug when treating depression. Popular SNRIs include Cymbalta and Effexor.

Monamine Oxidase Inhibitors (MAOIs): Drugs that inhibit the enzyme responsible for removing serotonin and norepinehprine from the brain resulting in greater availability of those neurotransmitters. MAOIs are commonly only prescribed to patients with severe depression that does not respond to SSRI or SNRI drugs because their effects last significantly longer.

Tricyclic Antidepressants (TCAs): Drugs that work much like the other classes by inhibiting serotonin and norepinephrine re-uptake but may present more side-effects. Popular TCAs include Elavil, Norpramin, Vivactin and Surmontil.

In addition, some clinicians may suggest taking St. John’s Wort, an herbal remedy that appears to increase serotonin and norepinephrine levels to effectively treat depression without the side-effects associated with pharmaceuticals.

Adjustments to medication are made based on the presence of symptoms requiring close observation by your psychotherapist. Pharmacological treatments for depression usually begin at lower doses and then increase. It may take weeks or even months for some therapies to begin working. When a patient seems to be unresponsive to one treatment or experiences negative side-effects such as loss of libido a different drug may be used either alone or in conjunction with another.

Being diagnosed with cancer can uproot your entire world and leave you shaken to your foundation. Your life is at stake and it’s normal to be afraid, angry, and confused about the future. If you’re suffering from depression and you’re not sure where to turn, talk to your physician and investigate the possibility of a referral to a therapist they know and trust. You are not alone; your family, friends, and caregivers still need you to keep fighting.