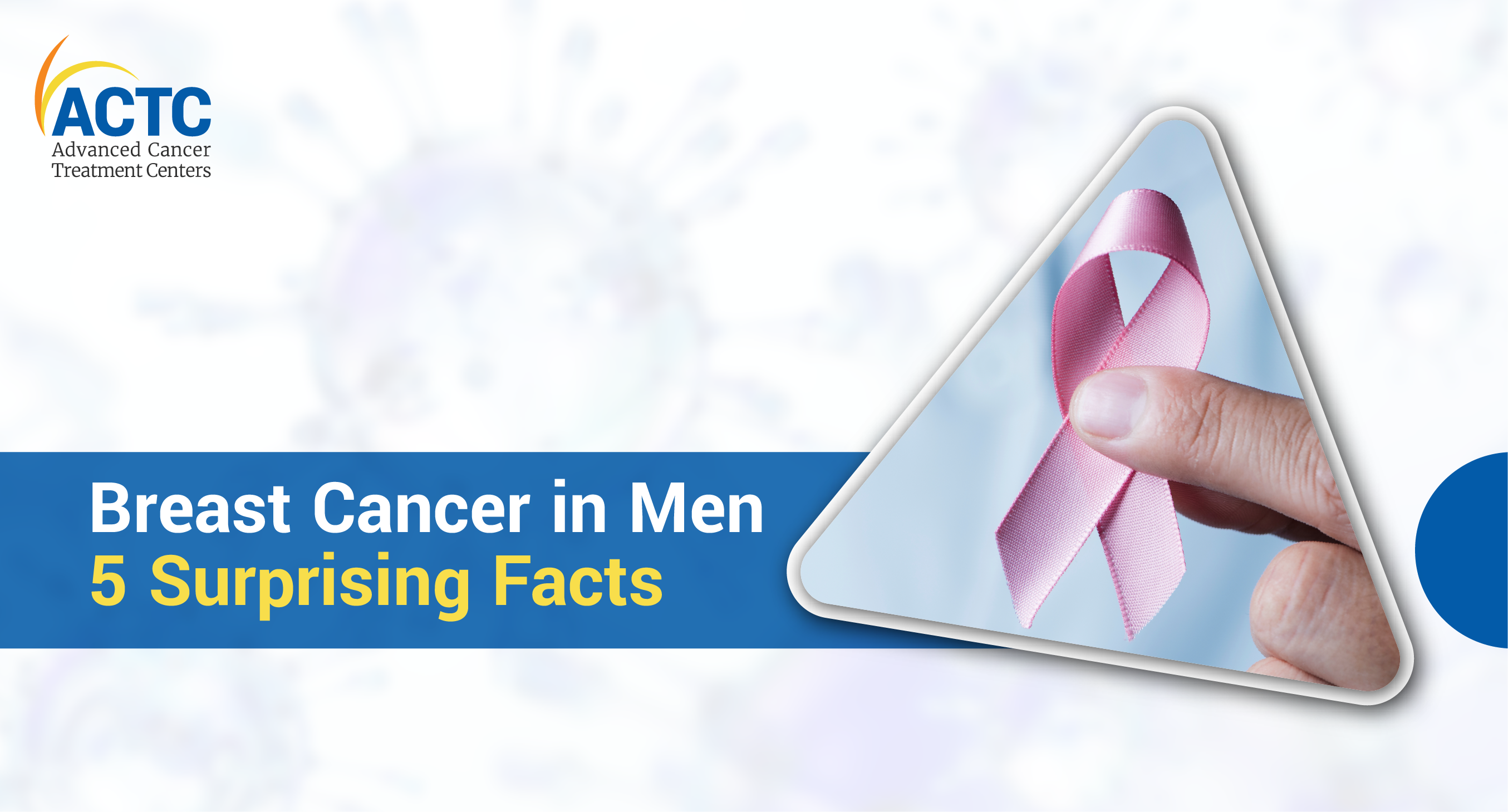 What is Male Breast Cancer?

Nipples, stroma, ducts (tubes that deliver milk to the nipples), and lobules (milk-producing glands) are the components of the breasts in both men and women. Puberty causes female breast tissue to grow because of hormones in their bodies. Male bodies produce hormones that limit the growth of their breasts, so their breasts do not develop.

Men do have breast tissue, in which cancerous cells can grow and spread throughout the body. Men's breast tissue can develop a type of cancer, known as male breast cancer. Ductal carcinomas, which start in the ducts, are the most common type of breast cancer in men.

Unfortunately, males usually get to know about their breast cancer diagnosis only once the disease has progressed significantly. This is because they don't have routine mammograms like women. These screenings enable early detection of breast cancer when it can be successfully treated. Additionally, men are not aware that they can develop breast cancer, hence they are not alert to changes in their breast tissue and lack awareness that a lump, any discomfort, swelling, or other symptoms require medical attention.

Doctors advise men to be familiar with the usual appearance and sensation of their breast tissue in order to be alert to any changes. There is less knowledge and study specifically focused on male breast cancer because there are fewer cases of the disease in men than there are in women.

Here are 5 facts regarding male breast cancer that are supported by research that you should be informed of. Because knowledge can save a life.

1. Breast cancer in men is rare but is on the rise

It is fairly rare for men to develop breast cancer, but the number of cases are increasing. Between 25 to 42%, more males are now suffering from breast cancer each year in the United States than there were in 1975.

2. Detection of breast cancer in men is easier

Men have less breast tissue than women, so a lump is more noticeable than that which a woman could discover via a self-exam or mammogram. Additionally, the skin may "pucker" or retract, and there may be a bulge around the nipple or armpit. Other common signs of male breast cancer include the following:

Breast cancer risk is increased for men who inherit specific genetic mutations from their parents. Compared to the average male, who has a risk of 0.1 percent (about one in 1,000), a man who inherits a BRCA1 mutation has an approximately 1 percent chance of having breast cancer in his lifetime. A BRCA2 mutation in a male ancestor increases risk by 7–8%. According to the American Cancer Society, 20% of males with breast cancer have a close relative who has or has had the disease. A man's risk of acquiring breast cancer is also increased by a chromosome disorder called Klinefelter syndrome.

Similar to women, men can undergo imaging tests like a mammogram (a low dosage x-ray of the breast) to detect cancer. Mammography just takes a few seconds. Additional tests, such as a biopsy or ultrasound, may be required based on the mammogram's findings.

Read More: 3 Reasons Why You Should Not Avoid Asparagus Solely for The Fear of Breast Cancer

There is a notion that estrogen is a female hormone and that testosterone is a male hormone. The truth is that the amounts of testosterone and estrogen in men's and women's bodies vary. Less estrogen is present in males than in women, although all men still carry some estrogen.

Male breast cancer risk can rise with higher estrogen levels which may occur because of the following reasons:

When a man is diagnosed with breast cancer, he may feel particularly isolated since he may not know any other males who have had the disease, and most resources about breast cancer are directed toward women. ACTC understands how challenging it can be for an individual in such circumstances. We provide personalized treatment based on evidence along with a supportive environment.

ACTC is one of the most trusted cancer care centers in Florida. Make an appointment by calling 352-345-4565 to receive expert guidance for someone you know, who has been recently diagnosed with cancer. 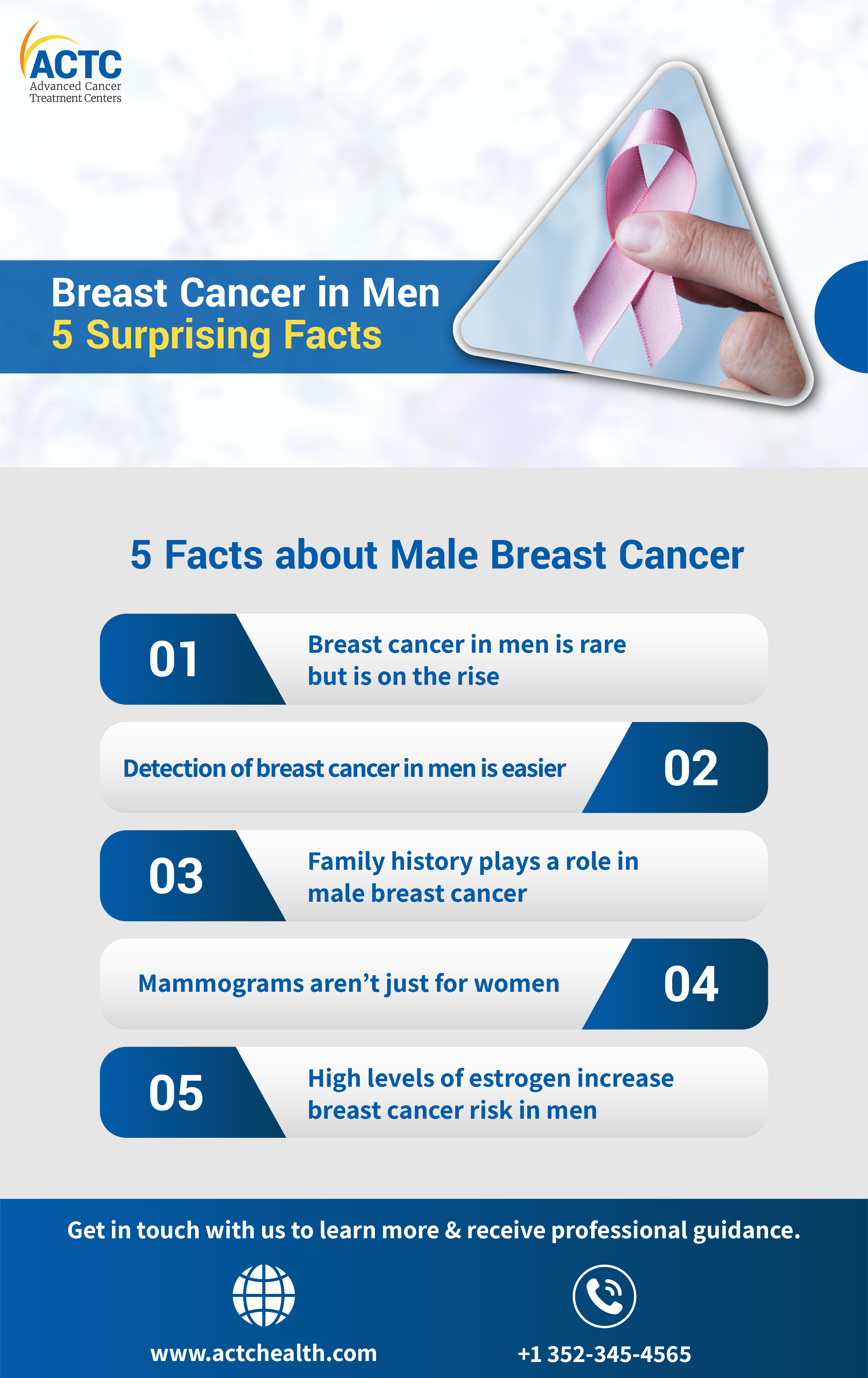